Chat with us in Facebook Messenger. Find out what's happening in the world as it unfolds.

Bullet holes pierce the main gate of the Civil Prison after a jail break in the coastal town of Arcahaiea, Haiti.

(CNN)A manhunt is underway after 174 inmates escaped from a prison in Haiti following a riot during which one guard was killed, authorities said.

The prison break occurred at a facility in Arcahaie on Saturday, said Inspector Garry Derosiers, the national police spokesman.
Of the more than 100 fugitives, a dozen have been captured, Derosiers said.
The uprising was led by "heavily armed individuals," according to a statement from the Prime Minister's office. It's unclear how the prisoners broke out or who the armed individuals were. 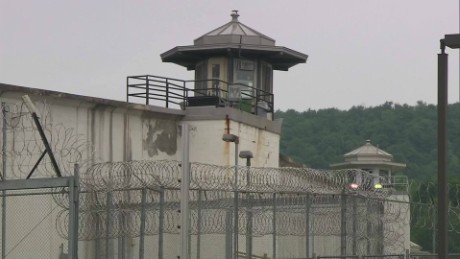 From power tools to helicopters: famous prison escapes 02:28
Teams from SWAT and the defense forces are searching for the inmates. Nearby residents have been urged to be cautious and cooperate with police.
Read More
The US Embassy in the capital warned American citizens to avoid the area, describing the incident as a "violent prison break."
Arcahaie is about 30 miles north of the capital, Port-au-Prince.
Follow @faithcnn